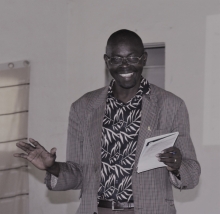 Knowledgeable! Ambitious! Hardworking! are arguably the first things that will impress anyone about Dr. Bhoka George, the District Health Officer. I walk into his office and he stands up to usher me in, we exchange pleasantries and sit down almost in unison. His respect for others is quite admirable. It is no doubt that a quick survey had nominated him as a role model figure not just at his department but at the institutional level too.

Hosting refugees as challenging as it is has proved to be, remains a blessing in disguise for the district. On 25th September 2019, we hosted officials from Ministry of Local Government, Ambassador of the Republic of Korea, UNDP Resident Representative, Korea International Cooperation Agency Country Director and Head of Sub Office, UNHCR - Uganda for the launch of the: “ Uganda Host and Refugee Community Empowerment “ Project that will run from 2019 to 2022.

Scenes of children singing passionately and loudly with the punctuation of a beautiful sound made by a band graced with excitement the usually quiet afternoon at the District Headquarters on September 3rd.

Our team of Under 12 girls won a trophy and 16 gold medals in the national champions Football tournament after emerging as the best. Their coach, Mawadri Charles Delson, was thus awarded as the Best Male Coach 2019.

Welcome to the home of one of the best local governments in Uganda. 22 years of independence from Moyo District has not only taught us the beauty of good service delivery but also challenges us each day to serve our people even better. It is a pleasure and indeed an honour that you have visited our site, thank you. We wish you the best as you orient yourself with what we have done in the past, are currently doing and what we hope to do. Karibu sana!