I joined service at Adjumani District Local Government in 1999, so I have worked for about 20 years now. I started as a Community Development Assistant and climbed through the ranks to Town Agent now.

What have you achieved so far? “I wish there was something more than being a woman, I would want to be a woman and more.”

I am a 24 years old mother. I work at Aulogo FM as a News Editor and English News Anchor. I also present the Morning Breakfast show called; ‘Aulogo Cira’ I previously worked at the Voice of the Nile in Moyo District. I hold a Diploma in Journalism from United Media Consultants and Trainers School of Journalism (UMCAT).

Why do you think you are the only female voice on Aulogo FM?

I am 33 years old. I hold a Bachelor’s Degree in Development Studies from …… I have worked with the Office of the Prime Minister Adjumani Refugee Desk for …. as the Community Services Officer.

What inspires you in life?

It is a hot Tuesday afternoon and the Principal Human Resource Officer (PHRO) has a neatly folded handkerchief laid beside his desktop. The reason is obvious; the weather has made its demands but duty calls too. The guests to this office are lined up in a queue, with each hopefully waiting for their turn to be a successful one. Each guest though has a different ‘piece of cake’ apportioned to them. Some will be successful while others won’t and the reasons are quite obvious. However, I get to only learn about the difference later as I interact with the duo that manes the office.

On 18th September 2019, we hosted the Permanent Secretary of Ministry of Local Government and the State House Comptroller who met with leaders from Madi Sub-Region to launch the commencement of the process to establish a zonal Presidential Industrial Park.

The visit was a follow up on a request made by President Yoweri Kaguta Museveni 3months ago when he visited the region on his wealth creation campaign and had promised that the region would be included among other 20 zones where Presidential Industrial Parks would be established. 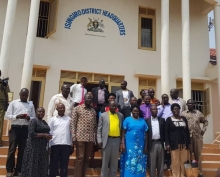 The 3rd of July started as a normal day for a select team of leaders and technical staff who were excited about a one-day study tour to Isingiro District Local Government until 13 hours later after they had only covered three-quarters of their journey but were too tired to continue. A joint resolution was then made to stop in the beautiful city of Mbarara and proceed with the journey early the next day.

It is amazing how our health Department continues to soar even higher. This year, during the Annual Regional Joint Performance Review meeting that was held in Pakwach, we received another award for best performance in the TB/HIV and Leprosy control program. It is no doubt that the discipline within soldiers is quite admirable but to be able to understand the motivation behind it, you would probably have to speak to one of them. On an early morning when I thought it would be a great opportunity to interact with Col Okuonzi Morris, the commander of Operation Wealth Creation in Adjumani, I set out to his office and therein I found him preparing a progress report.